Do you know the lady in the hat?

No? Then I will explain you. Definitely she is more than just a well-dressed skeleton. 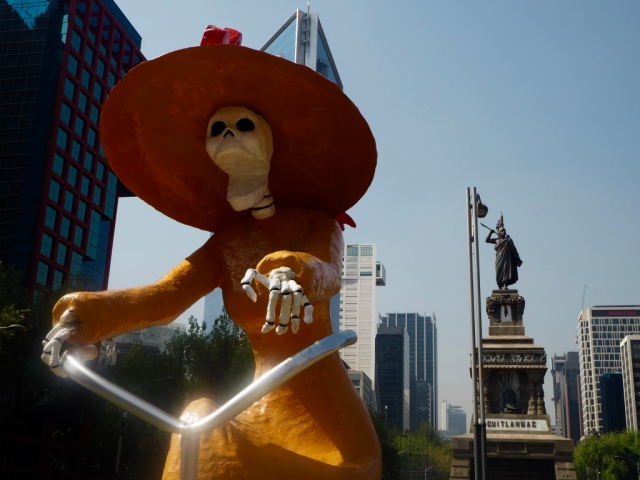 With her colorful plumed and flowered hat, and overtly toothy grin, La Catrina, „The Skeleton Lady“, heralds the coming of November. The most recognizable Catrina is Jose Guadalupe Posada’s etching „La Calaveras Catrina“. Created between 1910 and 1913, she represents the pronounced wealth possessed by the privileged. This class struggle between the haves and the have-nots led to the 1910 rebellion and Mexican Revolution. La Catrina became a „satirical obituary“ for the wealthy. La Catrina has become the foremost symbol of Dia de Los Muertos. La Catrina is portrayed in many forms: Chocolates and sugar, Paper Maché, and perforated paper banners, naming a few.

The first full-length Catrina materialized in the 1947 mural „Dream of a Sunday Afternoon in Central Alameda“ painted by Diego Rivera, where La Catrina holds a young Diego’s hand, and Frida Kahlo stands behind them. Prior to the Mexican revolt of 1910s, the social classes were extremely divided; the wealthy enjoying influence and prosperity on their life’s journey to be perceived as „European“, and not people of color. Those of lower social stature, the „invisibles“, were just barely getting by.

Some say La Catrina’s broad grin symbolizes the joy of living in the moment, in the constant face of Death. By 1948 La Catrina had become an important icon of Mexico’s national identity. La Catrina doesn’t just symbolize the Day of the Dead holiday, but exemplifies the Mexican people’s willingness to not only laugh at death, but to celebrate it. Typically portrayed as an elegantly coiffed, well-dressed European lady of means, Catrina represents all rich people. Whereas, there is no „official“ male counterpart to Catrina, male figures do exist, predominately in Paper Maché arms, either alone, in groups, or partnered with Catrina.

Before Posada’s famous Catrina, the Aztec people celebrated Mictecacihuatl, the Goddess of Death and keeper of the underworld. People celebrated death during the entire month of August, but after the Christians occupied Latin America, this celebration of death was moved to coincide with the Christian holiday All Hallows Eve/Day of the Dead at the beginning of November.

Mexican people honor dead in a variety of ways including offerings and alters, songs, and plays and death is treated with humor, respect, or both. November 1 and 2 are looked at as a festive celebration honoring family members with reverence and reconnection, Altars are set up in homes during the month of October to honor relatives, and graveyard visits include meals and treats with a family celebration at the grave site. Those celebrations can be simple or very elaborate. Food and Drink as favorites of the departed, candles and sweets adorn the sites for the evening. Sugar skulls marked with the name of loved ones are munched, to remind family members that dead isn’t the bitter end, but a sweet continuation of life’s cycle.

November 1 coincides with Mexico’s Day of the Innocents (Dia de los Inocentes), or Day of the Small Angels (Dia de los Angelitos), which focuses on the memories of infants and small children. All Soul’s Day on November 2 coincides with „Dia de los Muertos“ or Day of the Dead, and celebrates the past life of adults. No one is forgotten. And Death, the „Great Equalizer“ verifies that all will die, the rich and the poor, the have and the have-nots.

5 Antworten zu Do you know the lady in the hat?