A long weekend in Slovakia

Somebody told me about Piestany, the most famous spa town in Slovakia, with such enthusiasm, that I wanted to see it by myself. As soon as work was done and some money in the pocket I started. Just for a long weekend in October. 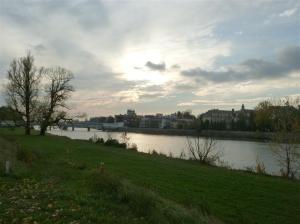 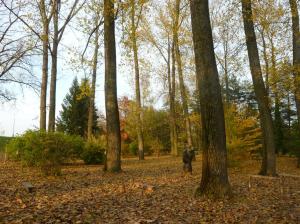 I was touched by the colours of the autumn leaves, the wide tree alleys and the sudden begin of winter with snow and cold temperatures. But I was prepared for that with wool pullovers, sweaters, winter jackets and boots in my luggage. And Piestany celebrates its 100 years anniversary in 2012. 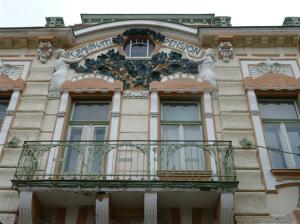 Hotel Tematin just outside Piestany convinced me with a large and modern room, spa area, massage offers, a great restaurant and a cosy open fire place for reading and writing. Ten natural healing springs rise in Piestany, containing sulphur and carbon, calcium and sodium and sulphuric hypotonic thermal waters at a temperature of 67 to 69 ̊ C. The water is beneficial for both external use in form of baths as well as internal use as a drinking cure.

The most beautiful part of Piestany is undoubtedly Spa Island. There the many impressive spa buildings include the Art Nouveau Jewel Thermia Palace Hotel (www.thermiapalace.sk). The hotel’s own spa, the Irma Health Spa architecture from the beginning of the 20th century are distinct not just in terms of Piestany, but all of Central Europe. Both buildings were completed in April 1912 and made ready to welcome their first guests. It is said that the name Thermia for the hotel was suggestd by the wife of first owner Alexander Winter, Henrieta, to which then added son Ludovit the word Palace. The name was to symbolise the position of the hotel in the famous thermal spa and its link to the spa, as well as the high standard of services, luxurious furnishings and exclusive premises. The spa treatment centre was named by Irma Erdödy, the wife of Imrich Erdödy, the son of the first spa owner. In 2006, after its general reconstruction it became the first five-star spa hotel in Slovakia. 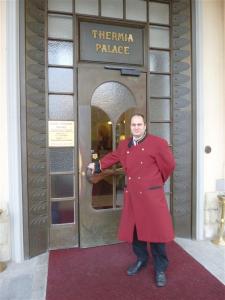 Mirrors, chandeliers and wall lamps have been preserved from the historic furnishings in the magnificient dining hall, where I had lunch. The interior is decorated with a set of marble sculptures portraying the Three Beauties, most probably dating back from the 19th century. In 1932 a gift from master painter Alfons Mucha, who visited the spa several times and whose daughter was healed here, took pride of place above the door of the dining hall. As a tribute to the healing power of the local thermal water, he donated an allegorical painting to the spa. The oil painting “God bless the spring of health” pictures a recovering girl – Mucha’s daughter – sitting in a rocking chair. Another girl and a woman dressed in the traditional local costume of Piestany are bringing fruit and a rose to the recovering girl, with the enchanting countryside around the river Vah in the background. 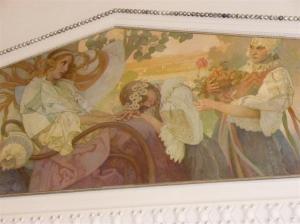 In the afternoon I visited Irma Health Spa which is directly connected to the hotel. It is a two-floor and three-winged building situated around the dominant feature of balneotherapy treatment, the mud pool. The cupola is supported by steel concrete arch ribs decorated by Art-Nouveau mascarons. The floor around the pool and the walls up to 2.5 metres are tiled in ceramics, with colourful ceramic strips above, depicting fantastical fish.

The order is 10 to 15 minutes stay in the thermal sulphur water of 39 ̊ C in the mirror bath, than the same time in the 41̊ C mud water pool. After 8 steps down I entered those pool with a strange feeling. The floor consists of thousands of years old mud from the river Var, yes, you walk directly on the bed of the river. It is said that the mud is healing and the pool guests put it around their necks and the shoulders. You can’t swim in the mud pool, you just wander around or keep standing or sitting on the tiled benches in the pool. After ten minutes I have been really tired. I went out and straight into the sleeping room with cosy plankets and hammocks for lying down half an hour or longer.

Next day starts the same procedure at nearby “Napoleonsbad”, the “Bath of Napoleon”. There the entrance is a bit cheaper and the atmosphere more socialist. There the mirror and the mud pool are more decent and modest. 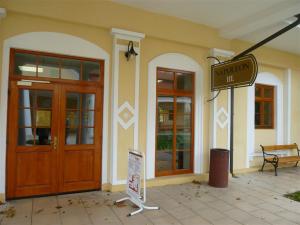 I enjoyed walking around the Spa Island with its beautiful autumn colours. In the back part of the island there are a group of hotel buildings in the style of the early 1970s. Charming socialist style of architecture. 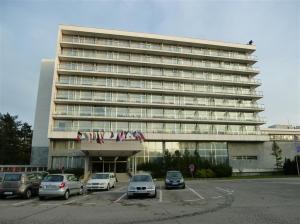 Outside the island is the normal town of Piestany. There I found Art Nouveau Architecture as well as Bauhaus or socialist styles. The pedestrian area is called Winterova street with relicts from former times. Having a tea in the bar of Eden Hotel, writing some memories of the past spa hours and looking out of the window. 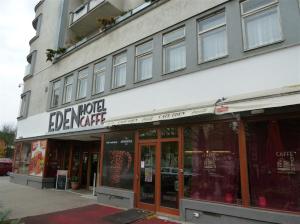 The legend of Piestany

Once there was an old white peacock that became sick because of chilly weather. The legend tells how the feeble and tired peacock lay down next to a hole with thermal water in it. The peacock slid down the muddy edge and the healing mud and thermal water soothed and helped it. For a few weeks the peacock took regular baths there and eventually got back to full health. People noticed this happening and from then on started to bathe in holes, which they dug near the springs of Piestany. The legend turned the peacock into the symbol of the Thermia Palace Hotel. 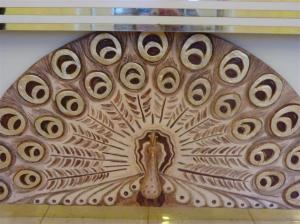