Continuing to Phnom Penh, the capital of Cambodia. I was here long time ago, during the research for my first book in 1996. One of my first places I went was the Foreign Correspondence Club (FCC), where I spent many evenings then. Still it is there, even when everything else changed dramatically. It is housed in a grand old colonial-era building and the views from the rooftop bar of the Tonlé Sap river are the same magnificent as before. Again I was sitting in the huge old leather seats, thinking of the past …

During my days in Phnom Penh I stayed in a small hotel downtown, calles Le Leela Hotel. My room was huge, with my own small terrace covered by palm trees. There was a pool and I was happy because I could do morning and evening swims.

Reflecting Phnom Penh: The city is a crossroad of Asia’s past and present, a city of extremes of poverty, excess and growing crime, but one that never fails to impress me. I still remember the detonations and shootings in the nights when I have been here in 1996. At this time Cambodia struggled with the dark shadows of its past, trying to survive the violence of its history. The city itself sits at the confluence of the Mekong, Tonlé Bassac and Tonlé Sap rivers. Long time considered the loveliest of the French-built cities of Indochina, its charme is still there. And the riverfront area in Phnom Penh is one of the most splendid in Asia – my opinion.

I got a driver and went to S 21, today called Tuol Sleng Genocide Museum. This former security office 21 in “Democratic Kampuchea” was created on orders of Pol Pot, the leader of the Khmer Rouge terror regime. In April 17, 1975, office 21 was called S 21 and designed for detention, interrogation, torture and killing after confession from the detainees were received and documented. On January 7, 1979 the Party and the Government collected all the evidence in S 21 such as photographs, films, the prisoner confession archives, torture tools, shackles and the 14 victim corpses, one of them was female. Tuol Sleng Genocide Museum was opened in August 1979, when the tribunal started the prosecution of the leaders Pol Pot, Ieng Sary and Khiev Samphorn. 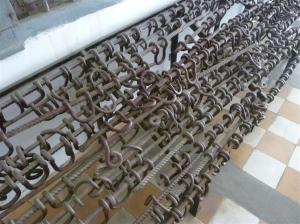 Previously the area hosted a primary and a high school. A fence of double-row iron topped with barbed wire. The enclosure was made after Pol Pot´s clique forced city dwellers to leave their homes and live in remote countryside in condition close to slavery. The 4 buildings of schools have seen classrooms turned into small cell caging individual prisoners. The front of the buildings was covered in a fishnet of barbed wire, preventing prisoners from committing suicide by jumping down.

In 1977-1978 Building A was converted into a set of rooms, the window were panelled with glass to minimize the sound of prisoner´s screams heard outside the facility in times of torture. That building was used for detaining cadres who were accused of leading the uprising against Pol Pot. Their cages were furnished with a bed, blanket, cushion and mat. An iron bucket or a plastic water-container was provided to dispose their body waste. Buildings B, C and D have been reconstructed differently: The ground floor was divided into small cell by brick walls, the first floor and upper floors were used for large cells where many prisoners were crowded together.

When the Vietnamese army liberated Phnom Penh in early 1979, there were only 7 prisoners alive, all of them had used their skills, such as painting or photography to stay alive. The bodies of 14 victims were discovered in January 1979, the corpses were unidentifiable due to bad decomposition. They were the last people to be tortured and killed by S 21-staff before they fled and are buried in front of Building A.

A wooden pole in the yard once used for physical education of students was turned into interrogation and torture machine. The interrogator tied both hands of the prisoner behind their back and lifted the prisoner upside down. This action was repeated a number of times until the prisoner lost consciousness, then the interrogator dipped the prisoner´s head into a barrel of filthy water. This shocked the victims back into consciousness, so that the torturers could continue their questioning. In total 1.684 staff members were employed there during the peak time of the Khmer Rouge regime. About 20.000 people got killed at S 21. Normally their imprisonment took between 2 to 4 months. Political prisoners were held between 6 to 7 months.

Next we drove to the Killing Fields of Choeung Ek outside the capital. Between 1975 and 1978 about 17.000 men, women, children and infants who had been detained and tortured at S 21 were transported to the extermination camp of Choeung Ek. They were often bludgeoned to death to avoid wasting precious bullets. The remains of almost 9.000 people, many of whom were bound and blindfolded, were exhumed in the year 1980 from mass graves: 43 of the 129 communal graves here have been left untouched. 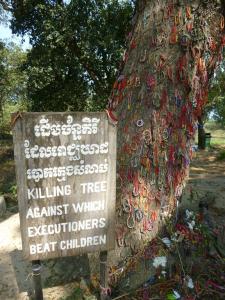 Fragments of human bone and bits of cloth are scattered around. More than 8.000 skulls, arranged by sex and age, are visible behind the clear glass panels of the Memorial Stupa, which was erected as a memory in 1988. There are more than 300 killing fields in the country.

Back on the bright side of life. I was invited to an art opening at the Bophana Center dedicated to  the artist Vann Nath, who died in September 2011. About 40 Cambodian and Western artists have contributed works to honor Vann Nath, who, having become one of the very few people to survive imprisonment at S 21, made it his mission to tell in paintings what had happened there. Seriously ill when he testified in 2009 at the trial of former S 21 director Duch, the painter was able to see him found guilty the following year at the Khmer Rouge Tribunal. More about the event at Bophana Center as well as my visits at the National Museum and Silver Pagoda at my new Blog sl4artglobal. 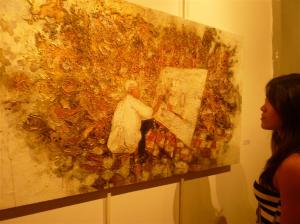 After being in the busy capital I had the wish to spend some days at a Cambodian beach town. No problem! Soon more!