Continuing to Vietnam by van. Every seat was occupied. For getting all the tourists we had to drive around Kampot a couple of times. At the border we waited for one hour. The border patrol asked for a vaccination certificate. People like me who had it not with had to pay 1 Dollar. That’s it! At the border town Ha Thien we had to board on a Vietnamese bus. I could only survive the noise with earplugs. Loud music, loud voices and all the mobile phones had their loudspeakers on. Cambodian attitude is much more relaxed, Vietnam is hectic, loud and screaming.

Into the Mekong Delta

It was already dark when I jumped out of the bus at Cantho, a city in the Mekong delta. I went on the back of a motorcycle, which are common taxis. My bag was in front between the legs of the driver. I stayed in the nice hotel Kim Lan not far away from the water front. I had booked a room via booking.com and when I arrived they upgradet it for free. Not bad. I went to the Old Market at the river and there visiting the restaurant Sao Hom, where I ate delicious spring rolls. Cantho is a busy town with 500.000 inhabitants. 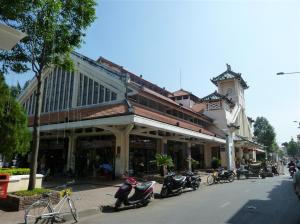 Most of the time I stayed at the river front which was not as stressful as downtown. For dinner I tried the red Dalat wine – delicious. The next morning I got off at 5 am, walking down to the waterfront. Here I met a woman on a paddle boat with motor. She was driving me to the floating market at Cai Rang. Despite of she was old and very slim she managed it  well.

We were passing many boats with vegetables, fruits and everything else including sellers and buyers. From a “coffee boat” I got my early morning cup of coffee. There were boats of different sizes, small, medium, larger ones. I could watch the morning life on the river. People were sleeping in hammocks in their boats, some got up, brushing their teeth with river water and washing themselves by diving in the brown waters. The woman who drove the boat was old and very slim. She managed the drive well. 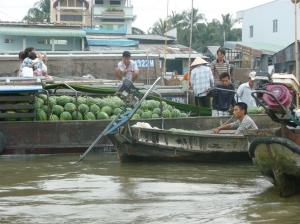 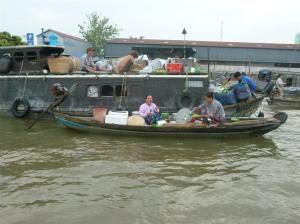 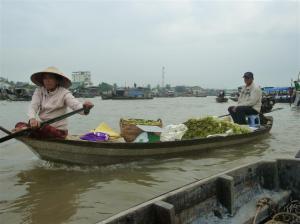 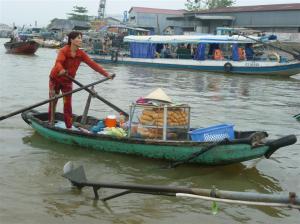 After the floating market she drove me to smaller waterways in the sidearms of the river. There was the life more rural and quiet. The water was so shallow that we had to wait for the tide. We could not go back or forth. We had to wait for hours. 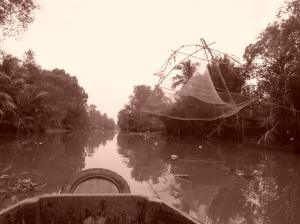 Good, that I booked my ride to Saigon for the late afternoon. Finally we arrived back in Cantho. I paid some extra money in the hotel and could sleep till the afternoon. A taxi came and picked me up, driving me to the bus station. There I boarded the vehicle to Ho-Chi-Minh-City. I prefer to call Vietnam’s biggest city with its old name: Saigon.

Back to Saigon after a long time

I arrived in the evening and took a taxi to my friend’s place. The taxi drove me around almost one hour. Finally I arrived in a pleasant housing area near the Saigon river. I stayed the next days in the villa of my friends. After arrival I got invited to a house party at the neighbours with fruits, good wine and champagne. A couple of days I spent in this fascinating city. I started my mornings with a swim in the large pool and enjoyed German coffee in a filter machine. 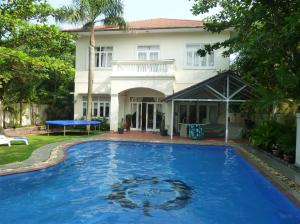 Then I discovered again the city which I visited long time ago for the first time. Still fascinating, but not as much as before. I strolled around visiting the cathedral of Notre Dame, the pretty main post office founded during colonial times in 1886 till 1891 and strolled along the expensive shopping boulevard Dong Khoi, former called Rue Catinat.

After dinner I sat and waited for Pyle in my room over the Rue Catinat, he had said, ‘I’ll be with you at latest by ten’, and when midnight struck I couldn’t stay quiet any longer and went down into the street. A lot of old women in black trousers squatted on the landing: it was February and I suppose too hot for them in bed. One trishaw driver pedalled slowly by towards the river-front and I could see lamps burning where they had disembarked the new American planes. There was no sign of Pyle anywhere in the long street.

Continuing with a motorbike to the Chinese quarter of Cholon, in former times the biggest Chinese city of French-Indochina. I walked around, visiting two temples and the big market with so many people, so many goods. I lost the orientation and was glad to be outside again after a long while.

I was drinking an espresso at the balustrade of the Hotel Continental and continued my way around town.

The first time Pyle met Phuong was again at the Continental, perhaps two months after his arrival. It was the early evening in the momentary cool which came when the sund had just gone down, and the candles were lit on the stalls in the side streets.
“The quiet American”, Graham Greene 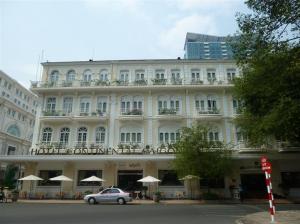 Graham Greene described this kind of vehicles called trishaws in his famous novel. I got one and the driver showed me the town:

The crazy Pham Ngu Lao-Street, which is backpacker’s paradise, the pagodas Chua Thien Hau and Chua Quan Am as well as Saigon-market and the Hotel Rex.

The Hotel Rex became famous during the Vietnam War when it was hosting the American military command’s daily conference, derisively named „The Five O’Clock Follies“ by cynical journalists who’d find the optimism of the American officers to be misguided. Its rooftop bar was a well-known hangout spot for military officials and war correspondents. 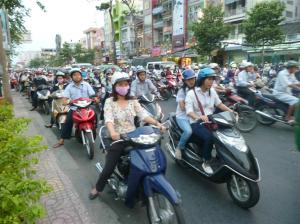 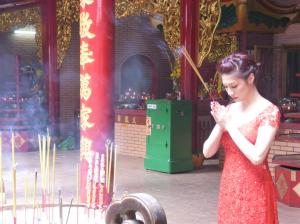 And I wrote postcards again. Alone just to mail them in the wonderful main post office. After one week already they arrived in Europe.

I decided to go on a 8 Dollar organised bus tour from Saigon to Tay Ninh, a city in a tropical, agricultural area, and besides the Cao Dai temple and the nearby Cu Chi tunnel system left over from the Vietnam War, there is little to draw tourists. Tay Ninh is home to the amazing Cao Dai religion and its colourful temple. Caodaiism is a relatively modern religion, officially established in the city of Tay Ninh in 1926.

Inside the main temple, worshipers and priests were already bowed, their heads planted firmly on the cool stone floor as they chanted words of praise, accompanied by a single drumbeat and a few stringed instruments. Dressed in long, flowing white robes they were attending their service of the day. 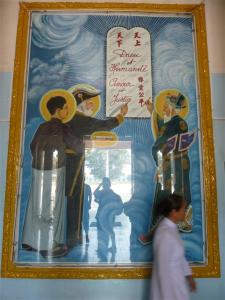 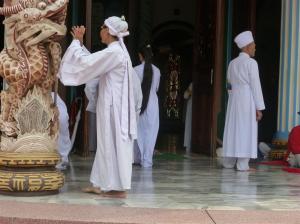 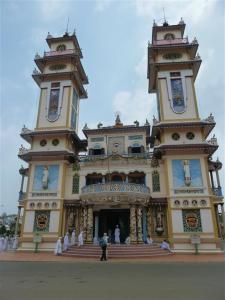 Closest to the Divine Eye above the altar, several priests in bright red, yellow and blue robes adorned with a large eye and with elaborate headdresses led the worship. On the balconies above, foreign and Vietnamese tourists watched in silence. Thirty minutes after the chanting had begun, it was over, and with that the worshipers stood up and quietly filed out. The priests and student priests remained, enjoying the cool temple air rather than braving the outdoor heat; some went to their rooms to rest. 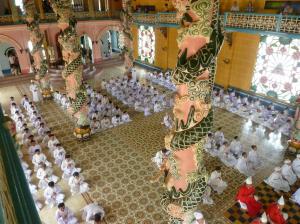 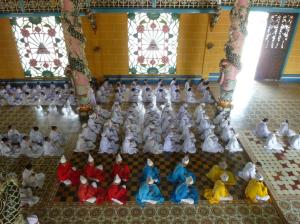 Every year tens of thousands of visitors, pilgrims and tourists, visit the temple to worship or simply to gaze in awe at its ceilings, vibrant colour schemes and praying masses. And then there is its unusual collection of saints and prophets, praising a religion that aims to unite all of humanity through the common vision of an individual creator — the same God honoured by most major religions. Today’s striking multicolor, dragon-adorned temple was built from 1933 to 1955.

Christ and Buddha looking down from the roof of a cathedral on a Walt Disney Fantasia of the East, dragons and snakes in Technicolor.
“The quiet American”, Graham Greene

In 1919, Ngo Van Chieu, a lowly Vietnamese civil servant working for the French colonial administration, received a vision of God and, following the heavenly message, began preaching a credo based on the unity of world religions. According to his new doctrine this would be the third alliance between god and mankind, the first coming at the time of the founding of Judaism and Hinduism, and the second around the time that Christianity, Buddhism, Confucianism and Taoism began. Cao Dai would be the third and final alliance, the religion that would unite and prove the unified message of all of these earlier religions.

The new religion followed the Buddhist cycle of reincarnation, drew upon the ethical precepts of Confucianism, had an ecclesiastical hierarchy similar to that of the Roman Catholic church and yet preached the Taoist concept of yin-yang, of two balancing forces, good and bad. Cao Dai spread quickly through Vietnam, and by the 1950s it was such a force that it was said to command an army of 25.000 in the Mekong region during the turbulent and uncertain days at the end of the French occupation. This rapid growth wouldn’t last. After the Vietnam War – during which Cao Dai priests refused to side with the Vietcong, the religion had all of its land confiscated. The land around the temple was returned in 1985.

The hell of Cu Chi

After so many colourful impressions I got a fascinating glimpse into what life was like for the thousands of troops of the Northern Army during the Vietnam War. I visited the Cu Chi Tunnels. They snake underground for over 250 kilometres and are three levels deep. The tunnels were built by local fighters during the Indochina conflict as a base from which the Vietcong could operate from close to the Southern Vietnamese capital. It took about 25 years to build this underground city, which has living rooms, kitchens, hospitals, weapon factories, storage facilities and command centres. 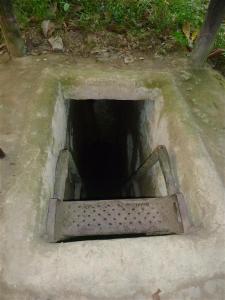 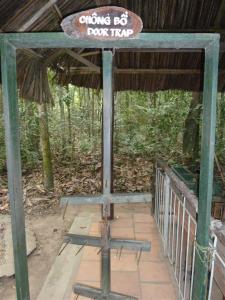 American soldiers used the term „Black echo“ to describe the conditions within the tunnels. For the Vietcong, life in the tunnels was difficult. Air, food and water were scarce and the tunnels were infested with ants, scorpions and spiders. Most of the time, guerrillas would spend the day in the tunnels working or resting and come out only at night to scavenge for supplies, tend their crops or engage the enemy in battle. Sometimes, during periods of heavy bombing or American troop movement, they would be forced to remain underground for many days at a time. Sickness was rampant among the people living in the tunnels, especially malaria, which was the second largest cause of death next to battle wounds. The tunnels played a major role in the Vietnamese winning the war.

From the tropics to the snow

Back to Saigon. It was time to say bye-bye to my friends.

I thought of the first day and Pyle sitting beside me at the Continental, with his eye on the soda-fountain across the way. Everything had gone right with me since he had died,  but how I wished there existed someone to whom I could say that I was sorry.
“The quiet American”, Graham Greene

I flew back to Bangkok. I enjoyed another girl’s day in a spa with my Bangkok friend Madeleine. 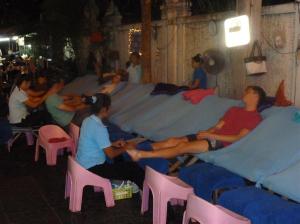 Last shopping was done and all I had to do was heading for the airport. Last view back to busy downtown Bangkok, stopover in Abu Dhabi, sleeping in the plane and finally arriving in Germany. The landscape was covered with snow.
Afterword:

I decided not to rewrite my book “Unterwegs am Mekong”. In it I pictured and described a different Indochina which lost – in my opinion – a lot of the magic atmosphere from the past. Instead of actualising the book I will write rather an afterword or an extra chapter which describes Indochina today. My dream of coming back to the countries I experienced long time ago didn’t get true.

To my readers: This was the last part of my South East Asian travels. Thanks for being with me. I hope you enjoyed it.